Spend your summer as a History Pioneer 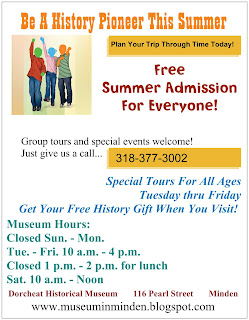 Be a History Pioneer at the Dorcheat Historical Association Museum. The Webster parish museum located at 116 Pearl Street is offering free summer admission to everyone, beginning with the end of the school year. Tuesday – Friday special 30 minute to 1 hour tours will be offered for young and old. Each child will receive a special museum activity book when they visit plus everyone will learn a little Webster parish history. Schelley Brown commented, “I hope that all parents and grandparents will take advantage of our free admission programs this summer. With the high cost of summer activities for children we wanted to be the place you can come to for an hour or so without having to spend a dime. We want to be able to fill a void for our visitors and children on summer vacation in our area. I have several types of tours for all ages plus I plan on having antique cars and tractors on display throughout the summer in front of the museum. We hope to have our theater room finished before summer is over which will be a great bonus for everyone. The museum is a fun place to visit and I know that everyone will enjoy the history activity book that they will receive at the end of their tour.” For group tours it is suggested to call ahead. For more information call the museum at 377-3002 or visit www.museuminminden.blogspot.com .
Posted by Schelley Brown Francis at 10:16 AM


Click on album above to see 2010 pics.
Weatherman Reports Of Hail, Tornados and Rain Hampers 2010 Show

The “2010 Cruisin’ For A Cure Wheels Through Time Show and Shine” once again is hampered by weather. Schelley Brown show promoter stated, “We had great pre-registration of 79 vehicles. That is usually 1/3 or sometimes ¼ of the number that will actually show up for a show. I knew from the week long weather reports that we may have some problems. People started calling from Mississippi, northern Arkansas and south Louisiana on Tuesday and Wednesday about the weather and if we were going to postpone. You just can’t postpone this type of event because you have no way to contact folks after you do so much wide spread advertising. With the threat of hail and tornados you are going to lose a lot of folks. We ended up with 116 registered by the end of the day. People just can’t take the chance of coming out with these types of vehicles. They have too much money invested to risk any damage. Many still came to the show they just came in the everyday cars. We did still have one group of motorcyclist come from north Arkansas. They ended up trailering the bikes and unloading at the Holiday Inn to attend for the first time.”
The weather turned out fine with the exception of a little rain around 8 a.m. other than that the overcast day was fine for show goers. The silent auction was a big success and the R & V Works fish cooker raffle went over big this year. With the help of show volunteers over 1000 $1 tickets for the cooker were sold and over $3,000 was made with the silent auction. Total numbers are not in for the show with outstanding bills still to be paid but Brown reported that even with the weather issue they could still end up with around $7-8,000 to split.
David Barnhill was the lucky winner of the $500 vehicle prize money. David graciously turned around and presented $300 to Terry Gray the grandfather of Brock Haines Cassell a recent St. Jude patient. The Ark-La-Tex Antique and Classic Car Association was the $200 club winner for the most pre-registered cars with a total of 8 cars registered before the April deadline. Margaret Evan was the winner of the fish cooker. Margaret graciously donated the cooker to the Dorcheat Historical Association to use in an upcoming September event.
“I have so many people to thank this year. I could not have done this years show without all my corporate and individual sponsors and the Webster Parish Convention and Visitors Bureau. Without our money sponsors we could not even start to do a show. Besides sponsors I also have to thank the Hunters and Coca-Cola of Minden for their continued support from the very beginning in 2004, Durwood Blake and Billy Reeves help with sound equipment, Ronnie Sale for his help with the stage and electrical, the members of the Dorcheat Bottom Band with guest Aubrie Stahl and Hunt Powell these folks rocked the fairgrounds, Mike Spillers aka “Elvis” the King of Rock n Roll in Minden, the city of Minden employees, Larry Tims of Fairway Carts, Jimmy Hall and his crew from Party Express Catering with their great food, Wayne Hatfield of Hatfield Ice in Homer, members of the Ark-La-Tex Antique and Classic Car Association, members of the Dorcheat Historical Association museum for all of their volunteer help at various task and stations during the day, my good friends Debbie & Barry Warner and Pam Holley for their help with registration since 2004, Joe Morgan for his expertise in fish cooker raffle ticket sales, Mitzi and Mike Madden for all that they do in so many ways, Danny Francis for his constant help and support, John and Melinda Parnell, Eddie and Katie Sangid, Shawn Lewis, Lynn Dorsey, Lou and Terry Snook for lots and lots of extra hard working hours before, during and after the show. All of these people and many more are what make this show work and run smoothly. Without them I would never attempt to do this.”
Posted by Schelley Brown Francis at 12:25 PM