The day finally arrived Forrest Gump dies and goes to Heaven. He is at the Pearly Gates, met by St . Peter himself. However, the gates are closed, and Forrest approaches the gatekeeper. St. Peter said, 'Well, Forrest, it is certainly good to see you. We have heard a lot about you. I must tell you, though, that the place is filling up fast, an

d we have been administering an entrance examination for everyone. The test is short, but you have to pass it before you can get into Heaven. Forrest responds, 'It sure is good to be here, St . Peter, sir. But nobody ever told me about any entrance exam. I sure hope that the test ain't too hard. Life was a big enough test as it was. St . Peter continued, 'Yes, I know, Forrest, but the test is only three questions. First: What two days of the week begin with the letter T? Second: How many seconds are there in a year?

Third: What is God's first name?' Forrest leaves to think the questions over. He returns the next day and sees St . Peter, who waves him up, and says, 'Now that you have had a chance to think the questions over, tell me your answers' Forrest replied, 'Well, the first one -- which two days in the week begins with the letter 'T'? Shucks, that one is easy. That would be Today and Tomorrow. ' The Saint's eyes opened wide and he exclaimed, 'Forrest, that is not what I was thinking, but you do have a point, and I guess I did not specify, so I will give you credit for that answer. How about the next one?' asked St . Peter. 'How many seconds in a year? Now that one is harder,' replied Forrest, but I thunk and thunk about that, and I guess the only answer can be twelve ' Astounded,

St . Peter said, 'Twelve? Twelve? Forrest, how in Heaven's name could you come up with twelve seconds in a year?' Forrest replied, 'Shucks, there's got to be twelve: January 2nd, February 2nd, March 2nd . . . ' Hold it,' interrupts St . Peter. 'I see where you are going with this, and I see your point, though that was not quite what I had in mind . . . . but I will have to give you credit for that one, too. Let us go on with the third and final question . Can you tell me God's first name'? 'Sure,' Forrest replied, 'it's Andy. ' 'Andy?' excl

aimed an exasperated and frustrated St Peter. 'Ok, I can understand how you came up with your answers to my first two questions, but just how in the world did you come up with the name Andy as the first name of God?' 'Shucks, that was the easiest one of all,' Forrest replied 'I learnt it from the song, 'ANDY WALKS WITH ME, ANDY TALKS WITH ME, ANDY TELLS ME I AM HIS OWN. ' St . Peter opened the Pearly Gates, and said: 'Run Forrest, run ' Give me a sense of humor, Lord. Give me the ability to understand a joke, To get some

humor out of life, And to pass it on to other folks. Since this is one of the b 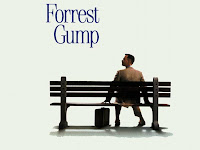 est movies ever made, I had to include this in my blog! It is just one of those cute emails that you get everyday.
Posted by Schelley Brown Francis at 9:38 AM

Sometimes A Louisiana Road Trip Ends Up In Texas!

I often travel Hwy 80 and all the other back roads of Louisiana, especially if I am driving an antique car or riding with my significant other on his Harley-Davidson. Because w 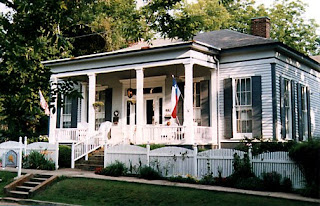 e live so close to the Louisiana-Texas line, we often find ourselves in Jefferson, Texas; for a quick get away. It’s only a little over an hour from home and it is very appealing for us to take off at the spur of the moment just to spend the night or just eat lunch and walk around shopping. The drive and or ride is always great!
Several years ago when I was planning Vintage Vacations for Shreveport car clubs, our first trip was to Jefferson. This is where we first meet the owners and operators of the Alley-McKay House Bed and Breakfast located at 306 East Delta Street in Jefferson, Texas. Hugh, Darla and son Atticus Har 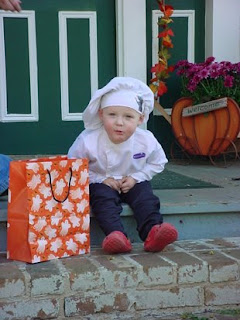 per Lee (Darla’s favorite book is “To Kill a Mockingbird”) are always happy to see us. Their hospitality is warm and so is their baking. Homemade cookies and pies usually fresh out of the oven are waiting for the next overnight guest to walk through the door every Friday. One of our favorite parts about the Mckay House, which you don’t want to miss, is the huge 9 a.m. breakfast! This is where you get to meet the other guest; it is always a treat to share stories at the breakfast table about your adventures the night before! Maybe a ghost story or two will surface or maybe a little karaoke excursion will be revealed from someone’s night at the local pub and restaurant “Auntie Skinners”.
I will first give you a little history of the home. The Alley-Mckay House was built in 1851 by Daniel Alley, one of Jefferson’s founders, as his own home. The original house was built in a Greek Revival style, with a wide central hallway an two rooms on either side. The kit 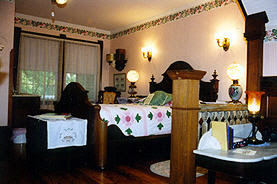 chen was a separate building, connected by a breezeway which was later enclosed as a porch area and then expanded to be the main dinning room.
The original part of the main house features the original cypress wood floors, installed when the house was built. Each of the four original rooms has a fireplace; during Daniel Alley’s time, they were coal burning fireplaces, but hey have since been converted to gas. The light fixtures hanging in the central hallway once operated on gas; they have been converted to electricity, but still retain the necessary pieces for gas.
The house was purchased by Captain Hector McKay in 1868. This family, descendants 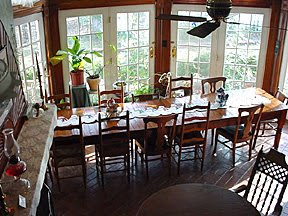 , or relatives owned the house for the next century. The McKay house was fully restored during the late 1980’s and now bears national and state historical markers. During the early 1990’s a Victorian style addition was added. The addition was built with material salvaged from Victorian-era homes around Texas which were scheduled for demolition. The gables came from a home near Waco which was built around 1880 and the stairwell from a home in Bryan.
The house has seen such famous visitors as former First Lady, Lady Bird Johnson; Alex Haley, the author of Roots; and Martin Jurow, director of films such as “Breakfast 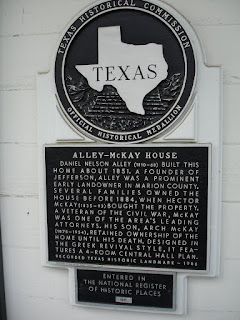 at Tiffany’s.” It is also reputed to house supernatural inhabitants as well. The ghosts of a man and a woman associated with the house in Waco have been seen on the staircase and in the upstairs rooms. Also, the spirit of a lady seems to be responsible for such things as moving tools across rooms and mischievously ringing doorbells.
Outside is one of favorite places to stay at the McKay house and that is the cottage. If you are traveling with another couple ask for the cottage. The cottage across the English style gardens is not the original carriage house. The building which stands today is slightly larger than the original, but is from the same time period, and one of the tow wood burning fireplaces stand where a fireplace once stood in the original building. I like the rustic room of the cottage, myself.
In April of 2002, the McKay House was purchased by the current owner, and inn- keeper, Mr. V. H 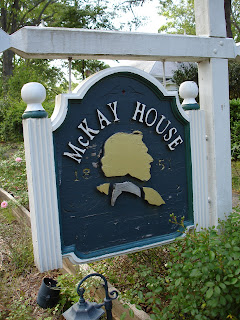 ugh Lewis II. Hugh. Hugh is a pleasure to do business with and always so helpful in telling you what see and do once you get to Jefferson. And believe me, there is always something going on in Jefferson, Texas. Car shows, motorcycle shows, river boat or train rides, tours of historic homes, riding in horse drawn carriages, visiting the wonderful Jefferson General Store is a step back in time, battle reenactments, plays, parades, and fireworks are just a small sample of what you can do in Jefferson once you get there. For more information on the McKay house visit the web site at http://www.mckayhouse.com/ or call 903-665-7322 Cell 903-240-9049. For Reservations, please call Classic Inns Reservations at 800-468-2627 you can email Hugh and Darla at innkeeper@mckayhouse.com . So until next time keep it between the ditches and tell your mama-an-em hello for me!
Posted by Schelley Brown Francis at 8:55 AM 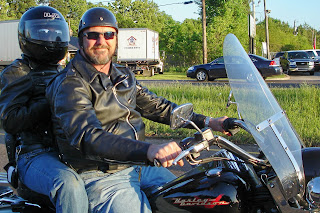 Saturday Morning at the Mckay House 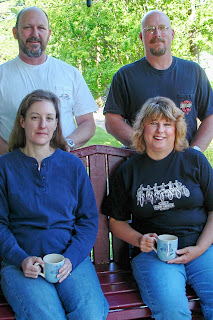 Going to Jefferson, Texas is always a treat. Kerry Easley Minden High Class of 1977 and wife Ann joined us for a short blast on the bikes to see lots of cool cars and visit with lots of my old car friends. Getting ready for my May 3rd St. Jude show so we handed out 300 flyers over the weekend stay. As always the McKay house was relaxing and fun. We are ready for the Boo Run in October! Hope we win the new motorcycle!
A Brat Rod! 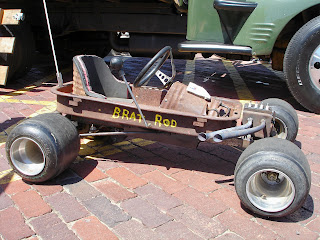 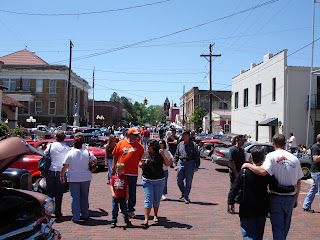 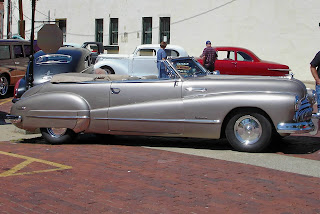 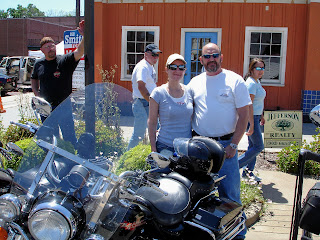 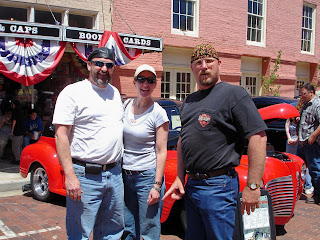 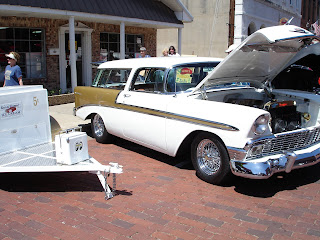 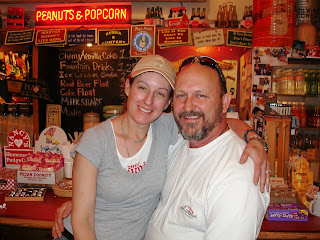 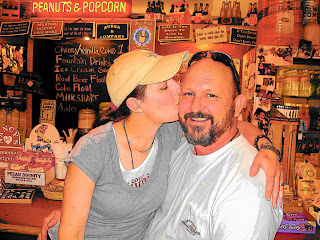 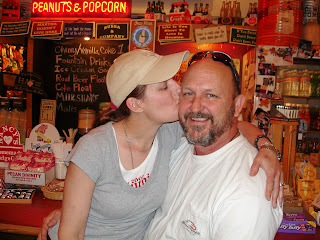 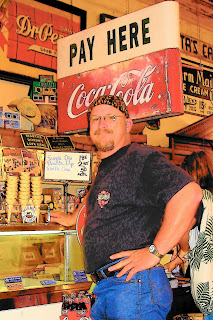 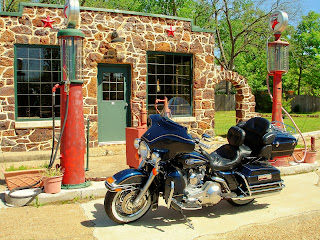 Are you Dixie or Yankee? Take The Test

This is me. I think I look pretty Southern in my hoop skirt and feather in my hair. This was taken March 29th, 2008 at the unknown CSA soldier grave marker ceremony at the Old Minden Cemetery. I found this test on my friend Jackie's site. So in honor of Confederate History Month which is in April I have included it for all of you to take the test. I am proud to say I am 98% Southern! I really figured I was 100%! I'll have to work on my faults I guess. Take the test and see what you are. 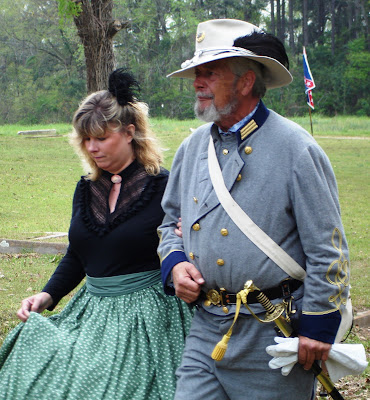 http://www.angelfire.com/ak2/intelligencerreport/yankee_dixie_quiz.html
Posted by Schelley Brown Francis at 6:38 AM