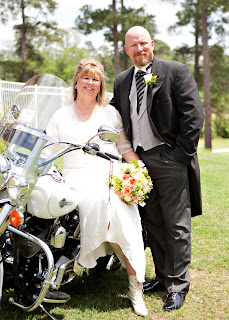 Mrs. Schelley Mignon Brown Francis & Mr. Charles Daniel (Danny) Francis joyfully announce their recent marriage on Saturday, the twenty-third of April, 2011. The double ring ceremony and reception were held at 2 o’clock the Saturday before Easter at Pine Hills Country Club in Minden. The bride is the daughter of Mr. & Mrs. Nolen Brown of Minden and the groom is the son of Mr. & Mrs. Charles Francis of Haughton.

The bride was escorted down the aisle by her mother, with the groom’s brother, Dean Francis, serving as best man. Miss Aubrie Stahl, niece of the bride, served as maid of honor, while Miss Shelby Francis, daughter of the groom served as bridesmaid.

The Victorian styled wedding and biker themed reception was a reflection of the couple’s hobbies of motorcycle riding and vintage cars. The bride wore an Edwardian style ivory lace dress with an ivory feather fascinator in her hair complimented with vintage style ivory Victorian boots, while the groom’s attire was a Victorian cutaway tux with pinstripe pants and grey ascot. In keeping with the tradition of something old, the bride wore a wedding gift of a family heirloom ( Schelley’s great grandmother’s gold locket that dated back to the 1800s), presented by her cousin, Mrs. Debra Heard Brown..

The wedding ceremony was performed by a longtime friend of the couple, Mr. Joe Hunter (Brother Hunter). A reading of 1 Corinthians by cousin of the bride, Kerri Couch, was followed by a song written and sung by niece and maid of honor, Aubrie Stahl with cousin, Kelli Couch, singing “The Lord’s Prayer”. A “Salt Ceremony” was performed with a personal reading written by the bride and read by Mrs. Kerri Couch with longtime friends, Barbara Lebel and William Vaughan, participating and serving as witnesses for the signing of the marriage license. The couple ended their ceremony and began the reception to the song “Ain’t No Mountain High Enough” with wedding guest participation.

The reception centerpiece was a four tier blush pink wedding cake adorned with pink and white sugar dogwood blossoms with bands of sugared pearls around each tier and a brown monogramed F in the center. The groom’s cake was a reflection of Danny and Schelley’s love of their Harleys. This three tiered groom’s cake in Harley-Davidson colors resembled a motorcycle tire with flames, complete with the bride and groom’s names at the top in the shape of the Harley logo. For a touch of fun, Easter Peeps with fondant helmets were added around one layer with the words “chick magnet” over their heads. This look was completed with a couple on a motorcycle cake topper. The bride and groom’s motorcycles were also a part of the wedding and used as part of the wedding décor. A special wedding toast was given by Mr. Carleton Prothro and a special song was sung by Mr. Pat Harper during the reception. In keeping with the day, a long distance award was given to longtime friend of the couple, Donna Rindskopf, who had traveled from California for the wedding. The couple exited the reception under a shower of heart shaped rice and stepped into an antique convertible Ford, while family and friends wished them a life filled with love and happiness.

A family fish fry later in the evening, catered by Jimmy Hall and Party Express Catering, was a chance for nearly seventy family members to relax and end a perfect day. A honeymoon is planned for September to the “Wheels Through Time Motorcycle Museum” in Maggie Valley, North Carolina, Mayberry Days in Mt. Airy North, Carolina and the Biltmore Estate.

The bride is the director of the Dorcheat Historical Association Musuem in Minden. The groom is a Signal Supervisor for KCS Railroad. The couple will make their home in Sibley, La.
Posted by Schelley Brown Francis at 12:38 PM